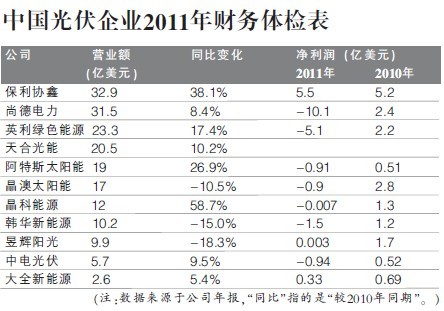 As of March 29, China's PV manufacturing companies listed in the United States, in addition to LDK, have announced their 2011 annual reports, most companies have suffered losses.

On March 28th, Liu Wenping, senior analyst of US stocks and vice president of Hongya Generation Investment Consulting Co., Ltd. put forward at the analysis meeting of China-Thailand Joint New Energy, in the past year, in addition to the rapid decrease in the cost of silicon materials, the decline in non-silicon costs is also worth attention.

Earlier, the consumption of silicon materials was the main cost of producing photovoltaic modules and batteries. Costs other than silicon consumption costs are called non-silicon costs.

Regarding the profitability of photovoltaic manufacturing companies in 2012, Liu Wenping believes that the key to seeing whether companies can bring a cost advantage of 5%-10% in technology and supply chain management is the main source of future profits. The future decline in the cost of silicon materials and non-silicon costs will be the driving force behind the development of the industry. Liu Wenping said that in 2012, the medium-level cost control will hardly make PV companies profitable.

However, since the third quarter of last year, the non-silicon cost of photovoltaic companies has rapidly declined.

â€œFrom the cutting of silicon wafers to the production of batteries and modules, there are many auxiliary materials in this area. For example, the decline of the diamond wire in the past year has been more than 70%. The price of slurry has also declined. Glass was about 80 yuan/square meter in 2011. It is less than 20 yuan now," said Liu Wenping.

Last year's annual report showed that the non-silicon costs of typical vertically integrated manufacturers such as Yingli and Tianhe reached about $0.64 in the fourth quarter of last year. Liu Wenping stated that Yingliâ€™s goal is to reduce the non-silicon cost to 0.56-0.58 US$/W by the end of the year, and TRW is lower than 0.6 US$/W; the non-silicon cost before Suntech has been relatively high, reaching US$0.74/W. Its 2012 target is $0.65. Crystal's goal is 0.57-0.58 US dollars / watt.

Aters plans to be more aggressive, including the cost of silicon, the company plans to reduce costs to 0.55-0.6 US dollars / watt by the end of 2012.

"This figure is more radical, and its roadmap is to assume that polysilicon cost is 20 US dollars / kg." Liu Wenping said that in the non-silicon area is also more radical and Yan Hui.

Inverted triangle integration model Even if the non-silicon cost began to decline rapidly in the third quarter of last year, the profitability of photovoltaic companies remains worrying.

Suntech's leading loss for Suntech last year reached 1.01 billion U.S. dollars, which is the highest among listed photovoltaic companies in the United States that have disclosed annual reports.

Liu Wenping believes that from the financial report point of view, the main problem of Suntech is that its silicon investment has not stepped on a very good point. "Before, when the silicon was relatively expensive, Suntech didn't do a good job of integrating and buying in the market. Some of the more expensive silicon wafers led to its long-term agreement with U.S. silicon chip maker MEMC, because Suntech began to invest in silicon wafers because of the supply of silicon wafers, but when the production capacity was released, the price of silicon wafers fell again. Because Suntech's silicon wafer production capacity is in the stage of climbing the industry, its cost is not low. This has a great impact on Suntech's 2011 cost control."

According to the 2012 production plan released by various companies, the worldâ€™s number one component in terms of unit shipments is likely to slip from Suntech to Yingli in 2012. "Suntech's 2012 plan is not so aggressive, and Yingli plans to reach 2.4GW-2.5GW, and shipments may exceed Suntech," said Liu Wenping.

When the market is booming, battery and silicon tension may limit Artes. "But it happens that in the third quarter of last year, batteries and silicon chips are no longer tense, and they can be bought at a very cheap price from the market. For it, the profits of this part of the components will increase." Liu Wenping said.

The risk of coal-fired power plants being contaminated Liu Wenping predicts that both silicon and non-silicon prices will fall in the future.

As far as polysilicon is concerned, Wang Haisheng, a photovoltaic analyst at Huatai United Securities, believes that although there have been a large number of corporate shutdowns last year, the production capacity of the world's largest manufacturers has reached 380,000 tons per year. Now, global demand is basically at 200,000 tons. On the level, so that as long as these big factories can still produce, then the surplus of polysilicon will continue for a long time."

Wang Haisheng predicts that the pressure on the entire PV market will be very large in 2012. â€œAnalysis from regional markets and intensive corrections of European policies have caused the expected fluctuations in the operation of photovoltaic companies. Whether it is Germany or Italy, the basic direction of policies of all countries is It is to suppress the development of photovoltaics."

In the battery sector, Wang Haisheng stated that the company is only listed in the United States and A-shares. There are more than 20 GW of production capacity added together. â€œThis is basically enough for the global digestion, but actually, the Chinese companies can also occupy the world. About half of the shares, so the bankruptcy of small businesses has little effect on this market, and the profitability of the entire industry has fallen sharply within a year."

Based on this, Wang Haisheng estimates that the gross profit margin for downstream power station development can be maintained at around 15%. â€œThis is the only one in this industry chain that still makes money.â€

However, Wang Haisheng also reminded that polysilicon was quite profitable last year, especially at the beginning of the year, but then the price of polysilicon fell very quickly, and the performance of late-investment manufacturers was very bleak. â€œIt is necessary to worry that the same tragedy will happen now. Companies that want to go to the photovoltaic company in the power station. Companies entering the system market ahead of time should be able to get into this cup. Late entry is more dangerous."

According to Liu Wenping, the long-term profitability of photovoltaic companies depends on technological upgrading.

Liu Wenping specifically mentioned Trina Solar, saying that the highlight of the company in 2012 was its technical improvement. â€œWith its 'honey' component, the 500 MW battery and module production line will be put into production in the first quarter, and its cost will be Significantly lower.â€ Liu Wenping said that the non-silicon cost of Trina Solarâ€™s â€‹â€‹$0.64/W was already better controlled, but there is still room for decline.

Wire containers are made galvanized before welding or after welding at higher cost. They are widely used for general warehouse use, storage, security, animal cages and shopping, etc. The wire mesh containers are light and strong. The Welded Wire Mesh Sheet can be fabricated into containers of various types, wire containers with wheel, roller containers, foldable, double layer and multi-layer containers. And we can supply the containers as the special need.

7. Many available sizes and capacity

3.As your request for  metal Wire Storage Basket